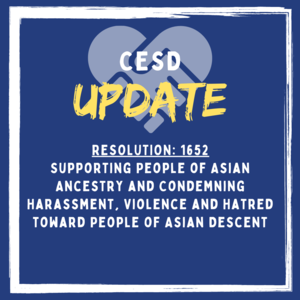 Relative to being able to take a position as a district and condemn anti-AAPI hate, CESD is proud to report that the board has approved resolution #1652 – “Supporting People of Asian Ancestry and Condemning Harassment, Violence and Hatred toward People of Asian Descent." Click title to read resolution.

WHEREAS, basic human decency requires a respect and acceptance for people of all backgrounds, and the motto of the United States of America is “E pluribus unum,” meaning “Out of many one”; and

WHEREAS, America’s professed values include a commitment to liberty, equality and justice for all — values the country has often failed to reach but should never stop striving to attain; and

WHEREAS, America’s diversity is a source of strength and prosperity and California’s vibrant communities benefit from cultural contributions made by people of every ancestry; and

WHEREAS, California is home to the largest population of Asian Americans, a group that has enriched the state in countless and invaluable ways; and

WHEREAS, Centralia Elementary School District is a vibrant, diverse district that serves a student population that is 26.95% Asian, Filipino or Pacific Islander; and

WHEREAS, people of Asian descent have suffered intense discrimination since California’s earliest days, including, but not limited to, the inhumane policies and treatment toward Chinese immigrants in the goldmining era, the Chinese Exclusion Act, the persecution of Filipino American workers, and the internment of Japanese Americans during World War II; and

WHEREAS, that discrimination continues today in the repugnant form of terroristic violence against Asian Americans; and a climate where Americans of Asian descent are being othered, targeted, scapegoated and killed because of their race; and

WHEREAS, an analysis by the Center for the Study of Hate and Extremism at California State University, San Bernardino found that overall hate crimes in America’s largest cities decreased by 7 percent in 2020, while hate crimes targeting people of Asian ancestry rose by nearly 150 percent during that same period; and

WHEREAS, schools have an obligation not only to prepare students academically but also to provide the foundation for personal growth and responsible participation in civic life; and

WHEREAS, schools must avoid the “model minority” trap and the related tendency to overlook the circumstances of Asian American children merely because this student group, overall, demonstrates high academic achievement; and

WHEREAS, our values of inclusiveness, humanity and respect demand that we support students of Asian ancestry and the larger Asian American community in this moment of national strife and at all times;

NOW, THEREFORE BE IT RESOLVED that the Governing Board of the Centralia Elementary School District condemns hatred, xenophobia, harassment and violence towards people of Asian ancestry and commits to creating a supportive, inclusive culture that fully embraces students of Asian descent.

Motion made by: Trustee Gonzalez

Second made by: Trustee Montez